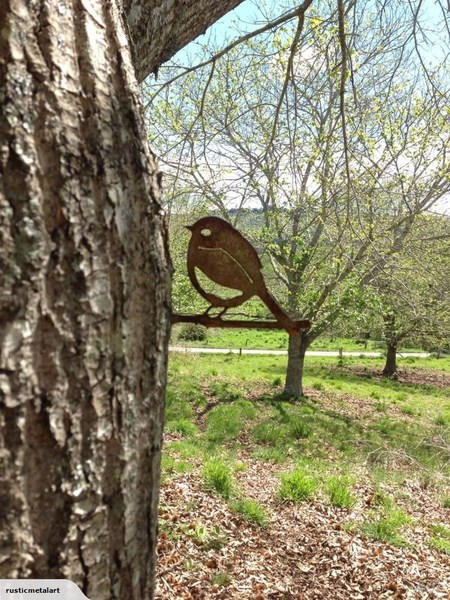 THE TOMTIT BIRD OR ROBIN BIRD AS THEY LOOK VERY SIMILAR

Material: Made of 2.5mm thick corten steel and all 100% Kiwi made in the mancave.

Designed to RUST but not degrade.
It may even be a bit rusty when it arrives...dependent on when it was created.

The tomtit is a forest and shrubland inhabiting species of both native and exotic habitats. It is rarely seen in highly modified open habitats, such as farmland and suburbia. Tomtits have a widespread distribution through the North and South Islands, and occur on some of their offshore islands, Stewart Island, Chatham Islands, Snares Islands and Auckland Islands. Most populations are dimorphic, males being mainly black-and-white, and females mainly brown-and-white. They are often heard giving contact calls or males singing, but are sometimes difficult to see. Individuals can be quite confiding, coming within a few metres.

The North Island robin occurs in forest and scrub habitats. It can be recognised by its erect stance and relatively long legs, and spends much time foraging on the ground. It is a territorial species, males in particular inhabiting the same patch of mainland forest of 1-5 ha throughout their lives. Male are great songsters, particularly bachelors, singing loudly and often for many minutes at a time. Where robins are regularly exposed to people, such as along public walking tracks, they become quite confiding, often approaching to within a metre of a person sitting quietly. Naïve juveniles will sometimes stand on a person’s boot.