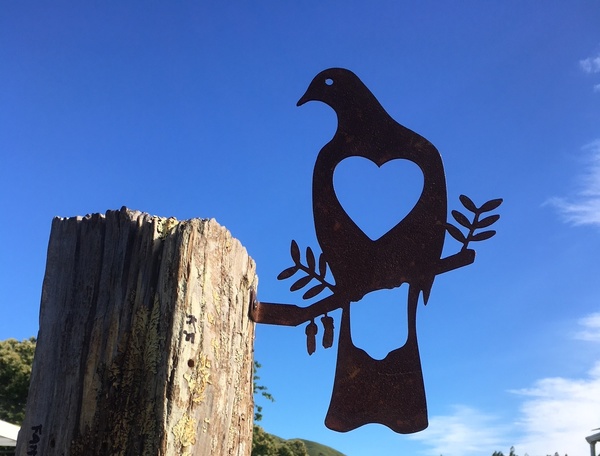 WOODPIGEON
Made of 2.5mm thick corten steel and all 100% Kiwi made in the mancave.


WOOD PIGEON ( KERERU) STEEL SILHOUETTE
Mount this to any wooden surface, post, gate, pergola, tree :), they look great when they attain a rusty appearance against the sky or green back drop

Designed to RUST.
It may even be a bit rusty when it arrives.. depending on when it was created.

This sale is for and includes the following:

This large and distinctively-coloured pigeon is a familiar sight to many New Zealanders. This is because the New Zealand pigeon (or kereru) has a widespread distribution through the country, being present in extensive tracts of native forest, and rural and urban habitats, including most cities. As well as allowing close approach, it often roosts conspicuously, such as on powerlines or on the tops of trees. The distinctive sound of its wing beats in flight also draws attention. Kereru also frequently feature on works of art, such as paintings and sculptures. However, even though it is widespread, like many forest birds its abundance is severely compromised by introduced mammals, particularly possums, stoats and ship rats. Only where these pests are not present (predator-free islands) or are controlled to low levels do kereru populations thrive.